Eat, Drink and Be Happy! 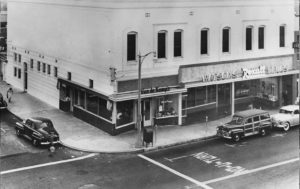 As a long time Orange County-ian (is that a word?), I must have driven by the historic Watson’s Drugs hundreds of times over the last forty years. I gazed at the happy faces sitting at the sidewalk tables and thought to myself …“I have to give that place a try sometime”. I remember peeking my head in the place, beer in hand, during the numerous street fairs I attended, once again thinking….someday. Well, that day finally arrived over the Thanksgiving weekend when me and Pops decided to brave the crowds and step back in time.

Anyone familiar with the Orange Circle knows the biggest obstacle is parking. We decided the best plan was to hit Watson’s right between breakfast and lunch at 11:00AM. Pulling into the free public parking lot directly in back of Watson’s…I spied a space being vacated by a satiated breakfast customer and squeezed my F150 into the spot. A short walk through the circle and we were strolling through the front door and into the 1890’s. Watson’s Drugs actually opened for business in 1899!

Watson’s Drugs recently changed hands and the new owners did a great job on the remodel. The new name is Watson’s Soda Fountain & Cafe (the only drugs sold now are beer, wine and cocktails). The new owners expanded the seating area with period button-tufted booths, wood tabletops with chrome banding and checkerboard tiles wrapping around the counter. Antiques and period signs surround the interior and overhead are recreated turn of the century tin ceiling tiles. They also opened a bake goods section where the old Van de Kamps bakery once stood.

We were seated quickly and handed a rather extensive menu. Had I not already read the menu on-line before coming…I would have been hard pressed to select anything promptly. They offer burgers, hot dogs, deli sandwiches, melts, salads, soups, chili, pastas and more! And of course, ice cream sundaes, malts and soda. I initially ordered the Coney Island Chili Dog but when I learned the chili had beans…I opted out (no respectable chili dog is served with beans). Instead…I ordered the Southern BLT with fried green tomatoes and Sriracha Mayo. Pops ordered a Patty Melt medium rare. We both reverted to our childhood and got tater tots instead of fries.

I was really glad I changed my order because this was perhaps the best BLT I ever had. The fried green tomatoes were fresh and a little crisp, the bacon thick and crunchy and the spicy mayo provided an extra kick. Pop’s was pleased with his Patty Melt and they actually cooked it medium rare (these days they rarely ask you how you want your hamburger cooked)! Pop’s and I both agreed that the Tater Tots were a nice change of pace.

Overall…I give Watson’s a 4 out of 5 stars. The food was hot and tasty and even the most finicky eater should be able to find something on their impressive menu. If your looking for a nice quite place to have lunch and chat…this isn’t it. The open air atmosphere provides for a cacophony of muffled conversations, plates and dishes clanging and cheers from the bar crowd watching the college football games. However…it suited me and Pops just fine. We will likely include Watson’s on one of our Happy Hour excursions as they have an attractive bar area and offer some Happy Hour specials.

So I’m glad I finally gave Walker’s a try. If you’ve been curious about Walker’s and like me…had just driven on by….stop in sometime. You’ll be happy you did

FoodForYall.com is a participant in the Amazon Services LLC Associates Program, an affiliate advertising program designed to provide a means for sites to earn advertising fees by advertising and linking to FoodForYall.com. Each of your purchases via our Amazon affiliate links supports our cause at no additional cost to you. Thanks for your support.

Get With It With Amazon!

Copyright © 2023 FoodForYall.Com
Design by ThemesDNA.com
We use cookies on our website to give you the most relevant experience by remembering your preferences and repeat visits. By clicking “Accept”, you consent to the use of ALL the cookies.
Do not sell my personal information.
Cookie SettingsAccept
Manage consent

This website uses cookies to improve your experience while you navigate through the website. Out of these, the cookies that are categorized as necessary are stored on your browser as they are essential for the working of basic functionalities of the website. We also use third-party cookies that help us analyze and understand how you use this website. These cookies will be stored in your browser only with your consent. You also have the option to opt-out of these cookies. But opting out of some of these cookies may affect your browsing experience.
Necessary Always Enabled
Necessary cookies are absolutely essential for the website to function properly. These cookies ensure basic functionalities and security features of the website, anonymously.
Functional
Functional cookies help to perform certain functionalities like sharing the content of the website on social media platforms, collect feedbacks, and other third-party features.
Performance
Performance cookies are used to understand and analyze the key performance indexes of the website which helps in delivering a better user experience for the visitors.
Analytics
Analytical cookies are used to understand how visitors interact with the website. These cookies help provide information on metrics the number of visitors, bounce rate, traffic source, etc.
Advertisement
Advertisement cookies are used to provide visitors with relevant ads and marketing campaigns. These cookies track visitors across websites and collect information to provide customized ads.
Others
Other uncategorized cookies are those that are being analyzed and have not been classified into a category as yet.
SAVE & ACCEPT